Home News Symposium Authenticity and Honesty: The Way to Perfection

Nor­bert Brun­ner was one of the experts at this-year SURPRISE FACTORS SYMPOSIUM “From Good to Great” in Gmunden.

Norbert Brunner in the interview:

As an artist, I think about going from good to great as a dif­fer­ent kind of chal­lenge. The chal­lenge is not to make some­thing new. The way I think about it, I need to make some­thing dif­fer­ent. It starts with me accept­ing what is dif­fer­ent about myself. Or, if you’re talk­ing about a region, about Upper Aus­tria, it starts with the local tal­ent, the indi­vid­ual tal­ent. When you start with that, then already you are dif­fer­ent. That’s your gift. That’s what you have to give.
That’s what I learned from my own child­hood. Because when I was born, I had a kind of skin can­cer direct­ly at my mouth. I had to go to a hos­pi­tal far from my home as a baby. I had to be sep­a­rat­ed from my par­ents who lived far away and couldn’t eas­i­ly come and vis­it me. But that was actu­al­ly very help­ful to me.

I learned that dif­fer­ences can be good. I had to learn to rec­og­nize myself, to stay focused when I was all by myself; I had to learn how to deal with per­son­al, emo­tion­al things. The peo­ple I met in the hos­pi­tal also inspired me to see the world in a dif­fer­ent way. Even when they were bad­ly burned, there was so much to them. Even when they were in pain, we found a way we could have fun togeth­er. That’s so much of what art is.

When I was in the uni­ver­si­ty, I loved it when one pro­fes­sor would talk about see­ing some­thing one way – and then after­ward anoth­er pro­fes­sor would talk about see­ing the same thing, but in a com­plete­ly dif­fer­ent way. My reac­tion was, this is super! Because now I’m com­plete­ly lost! And that means I have to come to terms with it myself.

„Here’s what I learned: In art there are no rules.”

But you also have to learn to be your own best crit­ic. I always have a strat­e­gy for any project I under­take. But I also have to look at the project as the process devel­ops and be able to see it as it is hap­pen­ing. I have to be able to rec­og­nize that the effect I’m seek­ing may not work. Then I have to change it, learn from it, and be able to grow as an artist from it.

What I want from my art is to feel the inten­si­ty of it. I want to feel that it’s authen­tic and I want to hear the voice that comes through the work. I do not want to teach but to make aware!”

That means that, as an artist, I am look­ing for expe­ri­ences where, in a way, I’ll be lost. I had to make a choice: Should I go to New York to do my art or should I go to Japan? I chose to go to Japan rather than to New York because, as a West­ern­er, I already knew New York. But I knew that if I went to Japan, there I’d have to con­front a much greater dif­fer­ence. I want­ed to rec­og­nize and learn from that dif­fer­ence. For me, it’s that process that is so impor­tant. In Japan they have a dif­fer­ent way of com­mu­ni­ca­tion. I want­ed to find out what it would be like for me there. Japan was a metaphor for me. In Japan, I learned that being dif­fer­ent is being beau­ti­ful. And I learned as well that we all are allowed to be dif­fer­ent. I knew for myself, if I rec­og­nize this, I would be stronger as a per­son and as an artist.

There is a les­son from my own life and from the way I’ve become an artist. If Upper Aus­tria wants to go from good to great, start with the strong points: What are your real­ly big goals? How do you focus on those? Focus on what makes you dif­fer­ent – those are the trea­sures you have. What do you have that you can show the world? What does the world not already know?

„That’s what makes you unique. Rec­og­nize those dif­fer­ences and focus on them.”

That’s how I became an artist. I wasn’t born an artist. I had no idea what art was. It was a step-by-step process. To become an artist, I had to get lost as a part of the process. Of course, when you get lost, it doesn’t feel good. It’s hard. You don’t like it. But it’s impor­tant to be in a sit­u­a­tion where you feel dif­fer­ent, a sit­u­a­tion where you’re not root­ed in place. I go back to my expe­ri­ence in the hos­pi­tal as a baby. I had to rec­og­nize that what made me dif­fer­ent was actu­al­ly my gift.

Hard work is always impor­tant. But the hard­est work is to rec­og­nize your self. That is extreme­ly hard work. For me, it’s the hard­est work of my life – to rec­og­nize myself and to grow as a result of that self-recog­ni­tion. At the end of the day, when you’re alone in your room in front of your mir­ror, you have to ask your­self, Am I still hon­est? Is what I’m say­ing com­ing deep from my heart?

It’s very hard work to stay authen­tic. It’s hard work to choose to be real, rather than famous. There is fame and there is mon­ey, and as you move up in your career, those can become dis­trac­tions. They can take you away from what is true for you as an artist. In the end, the real qual­i­ty in art is authenticity.

Nor­bert Brun­ner is an Aus­tri­an object and instal­la­tion artist whose work has been exhib­it­ed world­wide. He sees his work as an oppor­tu­ni­ty to enter into an ener­giz­ing process of com­mu­ni­ca­tion with the view­ers and observers of its objects. He grad­u­at­ed from the mas­ter class for sculp­ture at the Uni­ver­si­ty of Applied Arts in Vien­na. His objects and instal­la­tions are unique in the world. One of his most famous works is an instal­la­tion of 6 meters, which he designed for the Guer­lain flag­ship store in Paris in 2013.

Dur­ing his edu­ca­tion Brun­ner dis­cov­ered that dif­fer­en­ti­a­tion in art is a major fac­tor in per­son­al suc­cess. The oth­er­ness of his objects and instal­la­tions con­sists in the com­bi­na­tion of mate­ri­als, the arrange­ment of the indi­vid­ual ele­ments and the strat­e­gy that he pur­sues with his works.

For exam­ple, for his works Brun­ner uses mir­rors, acrylic glass, Swarovs­ki crys­tals and pho­to­graph­ic prints. They con­sist of numer­ous dots, which add up to an image only from a spe­cif­ic point of view. Nor­bert Brun­ner wants to fos­ter the self-reflec­tion of the view­ers and bridge the gap between art and the people.

Reflections on the journey

From Good to Great is Step by Step

Creativity and niches: Excellence in research 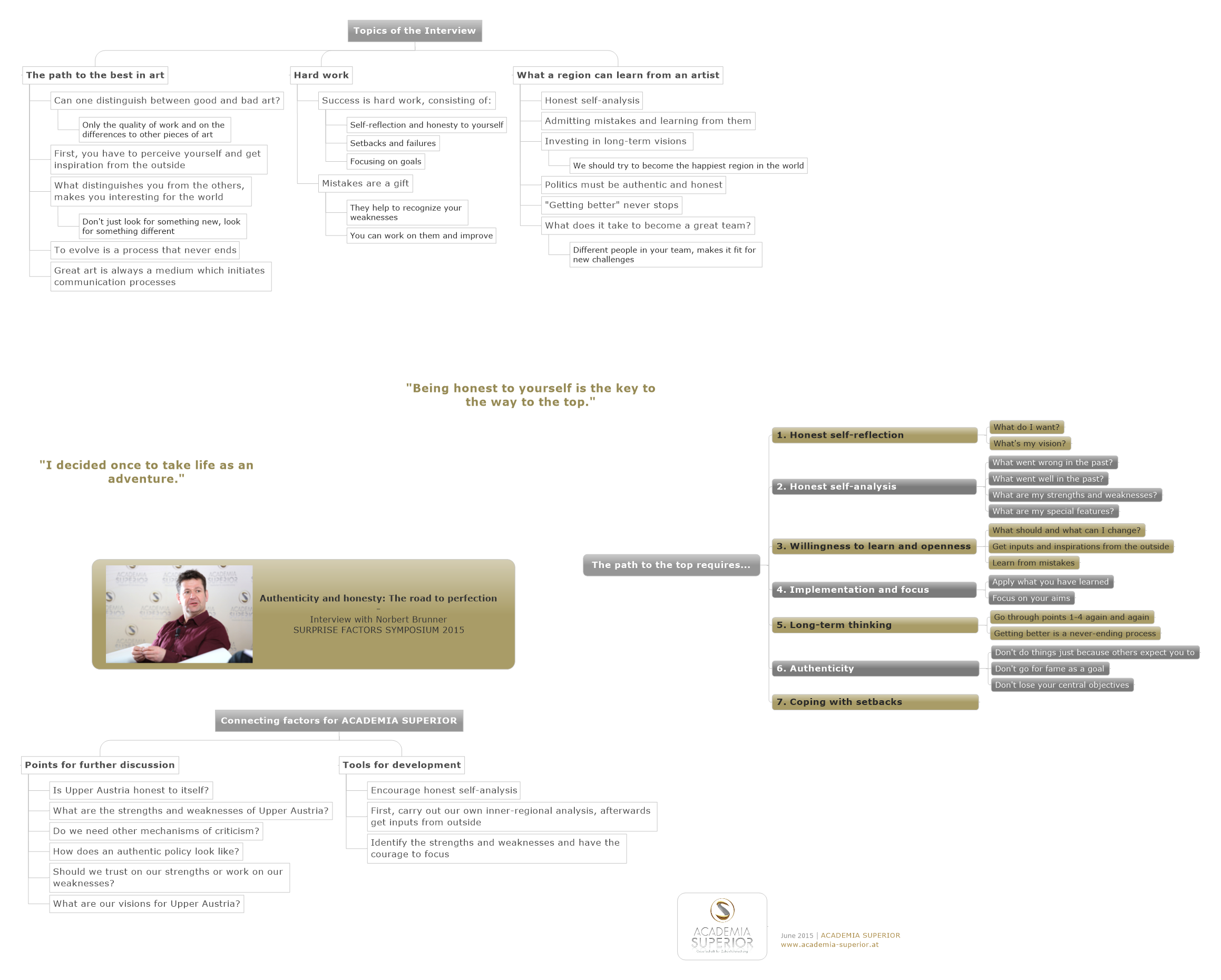