The concept of freedom is used in many areas of daily life. Freedom of the press, freedom of expression, freedom of choice are just a few facets of freedom which support the pillars of our society. Many freedoms are associated with obligations and these obligations are increasingly turning into constraints. Freedom and constraints – how do they fit together?

Stress factor freedom Early on it is communicated to young people in the Western world that they will have to reach many milestones in order to lead a good life. A range of options unfolds that seems almost unmanageable: specialized schools, vocational and secondary schools, apprenticeships with high school diploma, countless degree programs at universities, courses, seminars, internships, studies abroad and many more.

This wealth of choices – the supposed freedom to make exactly the right choice for oneself from countless options – creates a stress factor. And access is becoming even more complex: You need to pass entrance examinations and selection procedures; possibilities to study abroad are competitive and sometimes quite expensive. Paradoxically, fewer opportunities in the past were often put to better use. Choices create stress and they are not necessarily determining measure for leading a happy life later on.

Aristotle believes that you can only achieve happiness if you are free to act independently. However, the demands of society – having goals, performing well, finishing your studies in time, being successful – restrict independent and free action. Choice becomes torture. And those who don’t want or can‘t use this “freedom” withdraw from the system to find their inner freedom.

“We can only live in freedom if we accept responsibility.”

Everyone is free to buy a Ferrari; however only very few can afford it. Freedom has limits and they are mostly connected to resources: money, raw materials, work, time. The gap between rich and poor has reached a degree where it is becoming increasingly apparent in other sectors of society. This inevitably leads to radicalization, demarcation and the call for drastic measures. After all, in the long run, those who cannot live their own freedom won’t respect that of others. Morally we see a lot of restrictions to freedom at the moment. For example, smoking or eating meat is condemned as misbehavior by lobbyists with regard to its harmfulness to one’s own life or alternatively to the environment. The stigmatization of entrepreneurs in this part of the world is also part of this: the successful ones are stigmatized because they are exploitative; the bankrupt ones are stigmatized for having failed.

Where does the freedom to make your own mistakes begin and where does it end? How can you make mistakes and draw the necessary conclusions from them? Isn’t paternalism also a constraint in this case? Doesn’t it make us more incompetent, dependent and less free? You also have to learn how to fail. It is an essential element for the resilience of our economy, politics and society.

Therefore, it is also necessary to promote economic freedom. Europe is generally somewhat underdeveloped in this respect. Think about the regulation mania in Austria: No matter whom you talk to, everyone has for a long time been saying that we need to do something about making entrepreneurship more attractive, but no one is doing anything about it. It has to become much easier to start a new business.

Challenges in a free world

The hot spots in the Middle East and the refugee crisis currently pose completely new challenges for Europe. In this case Europe has a key position and assumes responsibility by helping the refugees and protecting them from war. However, Europe must not be left alone with these challenges; the situation affects the whole world and has to be resolved by joining forces.

Some European states do not assume their responsibility and take the liberty to create borders and leave the solution of the refugee crisis to others. This leads to even more pressure in countries like Austria, Germany or Sweden. To make matters worse, there are inner-European conflicts in the context of the financial crisis, weakening the Union’s stability even further.

The challenges to maintain peace and freedom are enormous. Sustainable solutions can only be found in fighting the causes, and this in turn requires uniting the forces of a world community which assumes responsibility collectively. Whether and how this path will be taken is up to the individual states and the values that form the basis of their societies. Our society has to find its way back to the values on which it was founded and should not forget that those values have to be defended again and again. 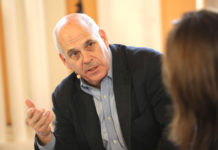 About Courage, Fear, Freedom and its Limits