I always felt that as an Austrian and as grandson of grandparents, some of whom were party members and passionate Nazis, at some point in your life as a storyteller you should do something about this important part of your past, of your family’s past.

There is an American scientist by the name of Joseph Campbell, who came up with a theory that there is a so-called “monomyth”, the quintessential story. And actually, all stories – the Bible, the Odyssey, Grimm’s fairytales – are expressions of this mono-myth. There is a hero and he hears a call to adventure. He is challenged, and this challenge can be that there is a white shark killing people. The challenge can be that he meets a beautiful girl and wants to get her. So he hears the call to adventure and finally crosses the threshold and then enters a new world.

“IT IS IMPORTANT THAT PEOPLE LEAVE THEIR COMFORT ZONE.”

I made a documentary called “Radical Evil”, and it’s about the so-called “Einsatzgruppen”. This was sort of the first part of the holocaust before there were even death camps. There were German troops, ordinary men, and they were especially in Poland, Ukraine, Belarus, and they were going from village to village killing all Jews – men, women, babies, children, old people. The film was about the psychology of these men because they were no super-Nazis, they were just ordinary men. But it was easy to turn them into mass murderers. And the most frightening part of the whole documentary was at the end, when I asked about those who refused to participate in the killing. There were very, very few who refused. And they were not executed but they were put on latrine duty. So, the choice was to either go out and kill or clean the toilets. And 99.9 % decided to go out with the others.

Running with the average is something that is deep inside us. 10,000 years ago, when the whole tribe was going to the left and you as an individual said, but I’d like it better over there and I go there alone to the right, a) you don’t have any offspring, b) you are going to be eaten by a lion. So all the individualists die, whereas the conformists survive and have children. Conformism is deep inside our DNA. We are social animals and therefore we are necessarily conformists.

I still like my definition of courage being the threshold to be crossed. I think for you as a person it is always good to cross thresholds, to leave your comfort zone, to try something new.

After completing his studies of theater and media studies and history at the University of Vienna, Ruzowitzky designed television productions, documentary films, comedy programs, commercials and music videos for artists like Justin Timberlake, The Scorpions or Stefan Raab.

His productions have received numerous awards. Stefan Ruzowitzky gave his directorial and screenplay debut in 1996 with the film “Tempo”, for which he received the Max Ophüls Prize, one of the most important awards for young filmmakers in the German-speaking area. The horror film “Anatomy” is still the most commercially successful German genre film to date. The powerful concentration camp drama “The Counterfeiters”, which premiered in the competition of the Berlinale, finally won the Oscar as “Best Foreign Language Film”. Also in the following years Stefan Ruzowitzky used a variety of formats and proved his tremendous versatility and the courage to try new things. 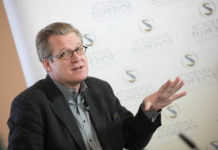 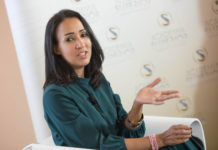 Manal al-Sharif: When you see injustice, speak up!

"A SIMPLE STORY WORKS BETTER THAN A COMPLICATED EXPLANATION."