Home News Symposium Steering the predictors: it‘s up to us to decide

What ramifications does this greater transparency have for the future of human beings? Does a greater ability to predict individual fates translate into a more predictable future for all? How much choice do we have in shaping the impact of big data and AI on privacy and public discourse, on emotions and behavior? Will technology determine us, or can and must we determine its applications and effects?

ACADEMIA SUPERIOR invited three renowned, out-of-the-box thinkers to explore these issues. Stanford Associate Professor Michal Kosinski had a formative impact on the field of psychometrics with his groundbreaking research ten years ago on the predictive capacity of data analytics. Today he is a vocal critic of the risks he helped expose, yet remains an optimist about the potential of new technologies to improve lives.

Nadia Magnenat Thalmann shares that optimism. The founder and head of MIRALab at the University of Geneva and Director of the Institute for Media Innovation at Nanyang Technological University in Singapore was an early pioneer in the field of computer animation. She says she sees herself as an artist and told us Rodin’s work helped inspire her to create the humanoid robot Nadine in her own image.

Author, journalist and former politician Susanne Gaschke is a sceptic when it comes to the impact of new technologies on the way we read, learn, and communicate. Klick, her manifesto against “digital dumbing down”, raised eyebrows when it was published ten years ago yet appears prescient in hindsight. She admitted to us that her election slogan “analogue instead of digital” was difficult to carry out in practice, but made a persuasive case for reflecting on when and how to set limits.

Discussion amongst the experts and the representatives of ACADEMIA SUPERIOR was nuanced and wide-ranging. Exploring where new technologies are taking us, Kosinski and Gaschke were forthright in describing drawbacks such as loss of privacy or polarization of opinion. Kosinski went so far as to declare that privacy was dead and argued that while we might mourn its loss, the transparency we gain could provide countervailing benefits – for a young student in a poor school district where an algorithm could provide better personalized instruction than overworked teachers could manage, or by opening a world of search engine options to a resident of a country with an autocratic regime.

“PEOPLE FEEL AFFECTION IN THE PRESENCE OF NEW TECHNOLOGY.”

Magnenat Thalmann also shared examples of positive benefits social robots could provide: as diagnostic assistants in searching for patterns that could indicate a condition such as bipolarity or dementia, or as companions for the elderly. She argued that humanoid robots offer otherwise isolated old people a “sense of presence, less loneliness” and said if it were a choice between holding a teddy bear in hand or enjoying the company of a Nadine, her clear preference would be for the latter: “It’s a question of dignity.”

Discussing limits of and on predictive technologies consumed a good part of the exchange throughout the day. Regarding inherent limits to capacity, Kosinski was adamant “that the perfect algorithm, the perfect prediction of the future, does not exist. You always are going to have some bias.” But he insisted that it is harder to root out bias in police officers, judges or customs officials – the human counterparts to algorithms in the fields of law or border protection – than it will be to develop techniques for recognizing and balancing hidden bias in technology.

“ALL LINEAR PREDICTIONS ARE SUSPECT TO ME.”

Likewise, Magnenat Thalmann declared that even as AI develops new capabilities, robots will remain machines, capable of simulating but under no circumstances actually feeling emotions such as empathy or warmth. Pointing out that she is intimately acquainted with the inner workings, the wafers and cables, of a humanoid such as Nadine, she said interaction with a social robot will remain qualitatively different from that with another human: “Humans are so much more complex and the interaction we have with humans is so much richer, it’s no comparison.”

Yet it was clear that our use of predictive technologies is affecting us as humans: Even if Nadine herself cannot feel, Magnenat Thalmann seems to experience something like affection when interacting with her creation. Gaschke asserted that overreliance on online teaching methods could undermine students’ ability to think critically and creatively, and said her newspapers’ online readers tended to communicate more aggressively and polemically.

All three guests want to see policymakers take action to set standards and limits for predictive technology. In Gaschke’s words: “I don’t see that any technology can be exempt from being a subject of political decision-making.” How to regulate was less clear, and here clear differences of opinion emerged.

Gaschke expressed her hope that payment models will emerge that allow for stronger data protection, while Kosinski condemned such models as reinforcing social inequality and ushering in a two-class system. He did, however, support rules compelling tech giants to share data with startups. Magnenat Thalmann described scientists’ interest in inserting ethical rules and legal standards into the software with which future AI is programmed, saying the problem is not technology but humans, and declaring in words that resonated with most of those in the room: “It’s up to us to decide what to do with our tools.”

Dr. Melinda Crane moderates high-level panel discussions and conferences for numerous organizations and companies and gives lectures on various transatlantic topics. She is a frequent panel guest and commentator on German television and radio and regularly analyzes US policy for the news channel n-tv.

As an experienced TV anchor and chief political correspondent in the English program of Deutsche Welle TV, she also comments on German and European politics and moderates the international talk show “Quadriga”. In 2014 she received the Steuben-Schurz Media Prize for her contribution to transatlantic understanding.

Melinda Crane studied history and political science at Brown University and law at Harvard, and earned her doctorate in political economy of development assistance at the Fletcher School of Law and Diplomacy.

As an international consultant for the discussion program “Sabine Christiansen”, Crane has produced interviews with Kofi Annan, Bill Clinton, Hillary Clinton and George Bush, among others. She has also written for the “New York Times Magazine”, the “Christian Science Monitor”, the “Boston Globe”, and the “Frankfurter Hefte”. 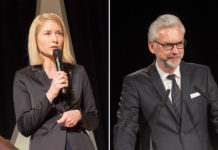 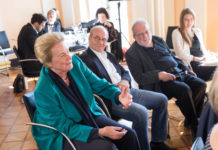 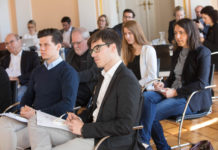 WE CANNOT STOP THESE NEW TECHNOLOGIES. HOWEVER, WE CAN AND HAVE TO SHAPE THEM.